If you’ve ever shared the road with the TITS Mobile, you may have wondered how Anne Ziegenhorn, the founder of The Implant Truth Survivors Committee (TITS), came to drive such an iconic car. Even as she shares the name with a wink and a smile, Anne wants you to know she’s passionate about her organization’s mission: advocating for women who have suffered dangerous repercussions from their breast implants.

Long before she became an international hero helping women get their explants, Anne lived through dangerous silicon poisoning from her own implants for more than a decade. In the ‘90s she was a 20-year-old working as a plastic surgeon scrub tech during a time when silicone implants were considered safe. Anne decided to go through her own procedure to equalize her uneven breasts. 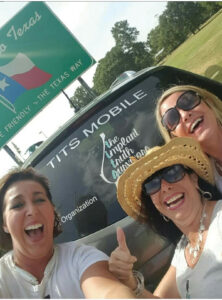 “My first set was silicone gel,” she said. “Back then we were told they were safe and the manufacturing representative showed us the studies. Five or six years later, silicone gel went on a moratorium and nobody could get it because too many women complained of becoming ill. The companies came back and told those of us in the industry they would give us a free set of saline so I switched mine out from silicone gel to saline breast implants, believing again that they were safe again. Within a few months, I started getting headaches, but brain scans didn’t reveal the problem.”

With the new studies supporting saline implants, plastic surgery professionals didn’t question that while women traded in their silicone gel for saline, the shell of the implant was still made of silicone and Anne got sicker and sicker.

“Around the age of 28, my skin started breaking out,” she said. “I’d had flawless skin my entire life and my dermatologist couldn’t clear this weird acne. Never thinking this was related to my implants, I tried all kinds of medicine and it didn’t clear up. I would also be slow to heal if I got a sore or cut. I started developing food allergies and became severely allergic to latex. I didn’t realize breast implants had a direct link to your hormones and they’ve been able to prove that they have a hormone disruptor to them. I started miscarrying babies. This imbalance in my hormones also caused fatigue, anxiety, and depression.

“All of a sudden, I had a thyroid issue,” she continued. “Now I have open wounds, breakouts on my face, and this underlying headache that never goes away. I’ve miscarried multiple times. I finally had two babies back to back that I carried to term but I swelled up so bad. I gained 90 pounds with my daughter and I gained 104 with my son. It was very hard for me to lose the weight but eventually, I did. All of a sudden, the swelling and weight gain started again. My swelling could be compared to the Michelin man. I had extra rolls all over my body and there were still open wounds, and sores on my feet. It got to the point I couldn’t walk. My sex drive decreased and my breasts became so sensitive that my nerves hurt and I couldn’t face a shower. My vision was going and I started to lose my voice. I sounded so strange, and it hurt my throat to speak. It was excruciating just to think about forming a word so I learned to control myself and appeared to be in a vegetative state. I communicated by typing on my phone or writing on a whiteboard.”

Because the doctors didn’t consider the implants could be the cause, Anne went through irreversible procedures, in the hopes each one would be the cure she was so desperately seeking. Over several years, Anne would go through a thyroid ablation, her gallbladder was removed, and her ovaries were taken. She finally drew the line at suggesting she needed a liver transplant. Anne knew in her gut that these weren’t the solutions she needed but with her voice gone, it was hard for her to communicate.

With the severity of her breast pain, the Mayo clinic finally asked Anne if she’d had a mammogram. For 12 years, yes, she’d faithfully gotten the screening, and each year she was told the results were normal. Anne would find out later that her most recent screenings were not normal.

On her lowest day, Anne went to see her endocrinologist and got devastating news.
“He couldn’t believe I’d been able to shuffle in,” she said. “He said, ‘I expected to see a very frail woman because according to your lab work, you have about two weeks to live and I suggest you get your affairs in order.’ He then asked me what vitamins I was taking so I wrote down that I was taking four times the recommended amount of potassium and magnesium. He let me know it was the only thing saving my life and asked me, ‘Who told you to take that much?’ It was God.”

Anne went home that day being told she wouldn’t be alive much longer but she refused to accept it. Her God was bigger than that.

Anne prayed for answers and the next day felt compelled to do a self-breast exam.
“As soon as I lifted my arm, I felt a whoosh, and warm water released into my body,” she said. “As I looked, sure enough, my breast was the shape of a ski slope and I knew my implant had ruptured. I thought, ‘Oh my God. This is what’s making me sick.’”

As the implant lay crumpled in her breast, Anne began to gain energy within hours.
“Even with the bad news I’d gotten, I had a mammogram scheduled that Monday so I went,” she said. “I wrote on my whiteboard that I thought I’d ruptured an implant and after they did the film, it was confirmed.”

The technician also told Anne they’d seen the leak two years earlier. Anne had been complaining about breast pain for five years but her results kept showing normal and not one person told her the implant was leaking.

Anne was advised by an attorney to show up at the clinic the next day and ask for all of her films. What Anne saw was anything but normal. Year after year, she could see something growing in her implant. It was rare to be able to see something like this on film but what Anne saw was mold.

When Anne had her implant removed, there was a brown liquid still at the bottom. Not only were there mold spores in the liquid, but the valve had also been faulty. Upon removal, Anne’s health began to significantly improve.

As a survivor and advocate, Anne wants women to know this information if they’re considering getting implants: “Women get sick from the silicone shell because they have 11 heavy metals and chemicals like formaldehyde and printer ink. I stress that all implants have the same silicone shell. Women are told saline is safe but if you’re sick from silicone, there is a possibility you’ll also get latex sensitivity, silicone toxicity and heavy metal toxicity. We also typically have some form of bacterial infection and/or fungal and yeast infections because saline implants can be a breeding ground. The implant manufacturers knew this and did not tell us.

“The capsule, or the scar tissue that forms around the implant, also needs to be removed because it’s touched the shell of the implant,” she said. “I already had poison sitting in my body, and then put fresh poison on top of it (with a new implant). That’s why I get sick quicker. I have a capsule inside of me that already has poison.”

Anne and her co-founder, Paula Blades, went to the FDA to offer their findings and were told they could fill out a form to share their “adverse event.” The friends formed the TITS Committee when the FDA told them they couldn’t be seen unless they were on a committee. Done.

Today, the TITS Committee is committed to sharing their personal experiences to educate men, women, medical professionals and insurance companies. They also help ladies with their insurance to cover explants and raise money to get explants done. The organization pays the surgeon directly once a patient is approved.

If you have any additional questions about implants, you’re seeking assistance in getting an explant, or you want to know about online communities, email titscommittee@gmail.com. 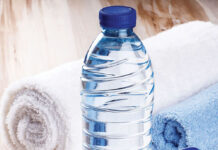 Do It Right! Hips & Thighs 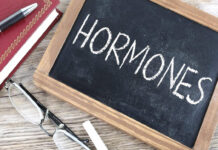 Hormones Aren’t for Me 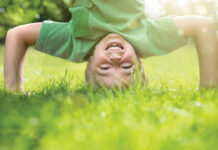