Home Fishing Off the Hook: Tarpon Run in Destin!

The Tarpon have arrived! A bucket list fish for many anglers, Tarpon are most commonly found in South Florida, but Destin sees a passing migration during June and July. Tarpon are known for their massive size, can reach up to 8 ft. long and weigh 280 lbs. They also have an extremely long lifespan, averaging approximately 50 years with the oldest being estimated at 63 years. Their majestic appearance garnered them the nickname “The Silver King” and the reputation as one of Florida’s most premier game fish.

One of the most intelligent fish, Tarpon are a prehistoric fish that have been dated back as far as 100 million years. They have no teeth, just a sandpaper like surface inside their mouths and they swallow their bait whole. Their scales are shiny and appear silver in color, and anglers will often take one scale as a prize for their catch.

Most people are surprised to see them swimming near shore, by the beaches in large schools. Often, you’ll see them “rolling” on top of the water, while they feed and they are one of the only fish to break the surface to gulp breaths of air. Being able to breathe outside of the water is partly why they can fight for so long while being hooked up. Anglers will experience fights with Tarpon that can last 2-3 hours, wearing the fish down before trying to get him to the boat. 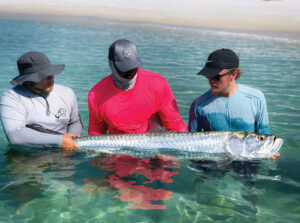 Tarpon, or the Silver King, are considered a once in a lifetime catch. Once hooked up, these fighting fish will jump and shake in the air, trying to loosen the hook and break free. There is a technique to catching them and being able to get them to the boat is a huge victory. Anglers cannot remove Tarpon from the water, and most will get in the water with the fish to take their photo. Per the FWC, these fish are protected and are catch-and-release only.

With our beautiful Destin already being a huge fishery, Tarpon adds even more to the area. Anglers can now target this bucket list fish during summer months on a boat, kayak or fishing pier and have a shot at the beautiful creatures. If you want the best shot at catching one, hire a guide who has perfected the catch, since these bucket list fish are one of the hardest to get to your boat. Destin has a variety of talented fishing guides who can assist you with these majestic creatures to cross them off your bucket list! 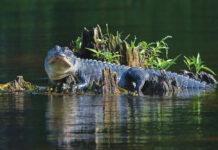 Learn to Be Alligator Aware 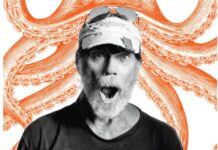