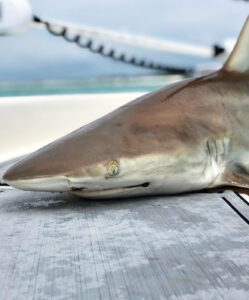 In August it’s time for everyone’s favorite: Shark Week! This year, Shark Week ran August 9 to 13 and with that comes Discovery Channel entertainment, restaurant specials, and more. Sharks are an integral part of our eco-system. So, let’s learn a little more about a few of the popular species around our area.

Probably the most noticeable is the Spinner Shark. They are one of the most fun to catch and can be easily recognized by their ability to jump out of the water while spinning in circles. They are large and slender, with a pointed snout, black marked fins, gray skin and a white belly. 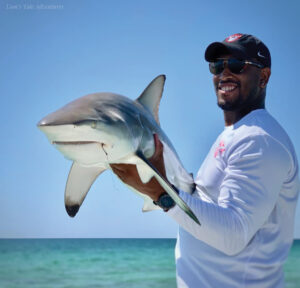 Next up is a Blacktip Shark, which can grow up to 8 feet long and have black markings on the tips of their fins. They can be found in warm coastal waters around the world and frequent bays, estuaries, coral reefs and shallow waters off beaches and river mouths – all the places to encounter people. However, Blacktips are typically non-aggressive towards people unless provoked or threatened.

Mako Sharks can also be found in our Emerald Coast waters and is known to be the fastest shark on Earth – reaching speeds of up to 20 mph. Their body is cylindrical, and females usually grow to be bigger and stronger than males, between 10-12 ft. long. Interestingly enough, 92% of a Mako’s diet is Bluefish, and it will consume 3% of its body every single day.

Bull Sharks also reside in our area and are known to be one of the most aggressive. They are opportunistic predators that can eat almost anything they find, and often hunt alone. Bull Sharks get their name from their short, blunt snout and their tendency to head-butt their prey before eating it. They are often found hanging around shallow, heavily populated areas in tropical climates, and while they may be aggressive, humans typically are not on the menu.

We’ve also had some Hammerhead sharks make appearances. While they typically reside in deep waters offshore, they will migrate in the summer months in search of cooler water. They are easily recognized by their hammer shaped head and are usually gray-brown or olive green in color. Most hammerhead sharks are fairly small and are considered harmless to humans.

Fishing for sharks has become popular in the recent years. Typically, it’s a long fight, one that really tests your strength against the shark’s strength. You can take a Shark Fishing Charter with a Captain, or you can catch them yourself off the beaches. A good variety of the sharks in our area are protected, making them Catch and Release only – but perfect for the trophy angler.

Now that you’re an expert on sharks, I’ll leave you with one more fun fact: Many of the scenes from Jaws 2 were filmed from Destin to Navarre and up to the town of Shalimar, filming enveloping the Emerald Coast back in the summer and fall of 1977. It was the highest grossing sequel in history, until Rocky II was released. 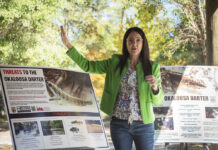 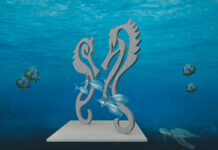