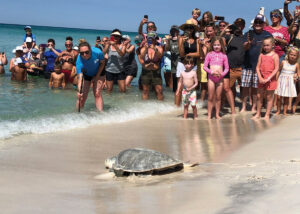 It was a beautiful morning as crowds gathered to watch the endangered turtles head back into the Gulf of Mexico. All of the rehabilitated sea turtles had fallen victim to fishing hook related injuries. One of the turtles was outfitted with a satellite tag for the release.

Jamie, a large adult female loggerhead weighing 208lbs, had been outfitted with a satellite tag by the United States Geological Survey team for a tracking research project prior to release. She was accidentally hooked at Navarre Beach Fishing Pier on Nov. 20, 2021. X-rays showed that she had a large circle hook in her proximal esophagus and a small treble hook further down. Jamie underwent a four-hour surgery on Nov. 22, to remove both hooks. After the surgery was complete, the recovery phase was very extensive. However, after a seven-month long stay at the C.A.R.E. Center, she was finally ready to be released. The satellite tag will allow researchers to monitor Jamie’s movements and track where she travels and how long she spends at each location. This equipment is part of an ongoing, long-term research project to determine the movement patterns of repeatedly hooked sea turtles at local fishing piers. This was Jamie’s third time being foul hooked at the same pier – she is an excellent candidate for this project.

The other three turtles that headed back into the Gulf of Mexico included Sheldon, a sub-adult loggerhead weighing in at 79lbs, who was foul hooked with a cobia jig in the right front flipper on April 18, 2022. Following the initial intake procedure, Sheldon’s X-rays showed a large hook embedded in his tongue. After mild sedation, the hook was successfully removed. Sheldon was under observation by our veterinary team for a few weeks to ensure all was well and after being cleared for release, he was ready to head back into the Gulf of Mexico. This was Sheldon’s second visit to the C.A.R.E. Center for rehabilitation.

Pluto arrived at the C.A.R.E. Center on May 10, 2022, after being foul hooked by a fisherman at Navarre Beach Fishing Pier. This sub-adult loggerhead weighs 90lbs and had unremarkable blood work and clear radiographs upon arrival at the center, so was medically cleared for release by the veterinary team once the hook was removed. This was Pluto’s third visit to the Gulfarium C.A.R.E. Center.

Shirley, a sub-adult Kemp’s ridley sea turtle, who was hooked in the mouth with a J-hook on May 8, 2022, at Navarre Beach Fishing Pier was also released. Shirley weighed in at 56lbs and had a very quick stay at the Gulfarium C.A.R.E. Center. With unremarkable blood work and radiographs, she was deemed medically cleared for release by the center’s veterinary team.

“Release days are always extremely rewarding,” states Tabitha Siegfried, Stranding Coordinator for the Gulfarium C.A.R.E. Center. “We are very excited to be participating in a research project that includes a satellite tag as all sea turtle species are endangered so any help that we can provide to these animals is crucial.”

If you see a sea turtle in distress, injured, or deceased please report it to Florida Fish and Wildlife Conservation Commission immediately at 1-888-404-FWCC (1-888-404-3922).
Follow the C.A.R.E. Center on Facebook to learn more about sea turtles and the center’s rehabilitation efforts. The C.A.R.E. Center and its patients can be visited as part of a general admission ticket to Gulfarium Marine Adventure Park.

The Gulfarium CARE Foundation, a 501(c)(3) non-profit, is proud to act as a beacon for coastal conservation through marine animal rescue and rehabilitation. Donations are tax-deductible and can be made online on the C.A.R.E. Center’s webpage. 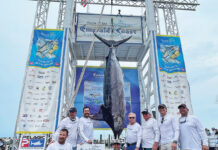 Off the Hook: A Work of Art Takes First Place at EC Blue Marlin Classic 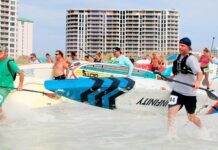 Paddle at the Park August 20!