Our hometown American flag mural painted on the roof of Legendary Marine has been confirmed by Guinness World Records to be the largest flag mural in the world and honors our hometown heroes— our military men and women, veterans, police officers, sheriffs, firefighters, coast guard, EMTs and all of our first responders. 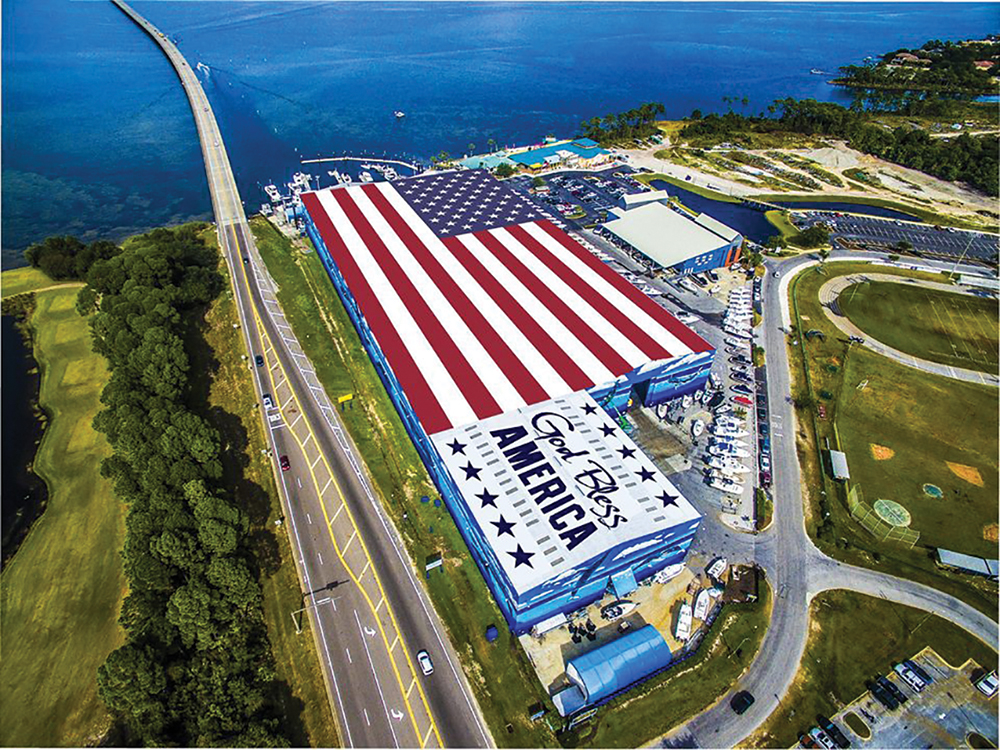 “I got the idea really to do the flag,” said world-renowned artist Robert Wyland, or to most just ‘Wyland,’ because an officer here, Bill Myers, was murdered serving a warrant and the officer was retired, just trying to earn a little bit of money to take his grandchildren to Disney World and it broke my heart. So, I said I want to honor this officer and all the officers across America,” he says on WorldRecordAcademy.com.

Along with our first responders, police officers, EMTs, firefighters and others, the Emerald Coast is home to several military bases from Panama City to Pensacola—seven large bases! Eglin Airforce Base in Fort Walton/Valparaiso, 463,128 acres, is right around the corner and considered one of the largest air force installations in the world. These heroes are the inspiration that moved Wyland to paint the largest American Flag mural. “We have 300 million people in the U.S. One hundred percent of them should support our military, our vets, our police, our firemen, our coast guards, all our first responders,” said Artist, Wyland. “One hundred percent. Are you guys with me?”

The most recent mural, which measures 554 feet by 299 feet – an impressive 3.8 acres in size, was dedicated as a “THANK YOU” to the United States Military and first responders in April of 2016. The strong military presence in this area creates pride in the community for our country and appreciation for the ones who serve and dedicate their lives to protect and defend us every day.”

Artist Wyland is best known for his life-sized and life-like marine murals, part of a 25-year 100 “Whaling Wall” project, where he has painted phenomenal eye-catching renderings of whales, dolphins and other ocean scenery on the sides of buildings and places all over the world. As one of the largest marinas around, Legendary Marine was the perfect canvas for one of his most spectacular whaling walls, #88 finished in 2001. That’s when Wyland added the original mural of a big American Flag to the rooftop as sort of a secret surprise to “catch your eye” while in the air.

The flag seen today is an expansion from the original painted in 2001. When Wyland expanded and reconditioned the Whaling Wall in 2016, the vision for a much more dynamic eye-catching American statement was born. It took a joint effort by Wyland, Wyland Foundation, Legendary and Sherwin Williams to create the Largest American Flag Mural ever right here in Destin as a tribute to our country and military. “I looked up on the roof the old flag had faded away and I took Peter up there and said why don’t we paint the largest flag on earth and he looked at me and said, ‘Of course,’” said Wyland to Legendary owner Peter Bos. “When we painted the first flag in 2001, it was only painted on the north end of the roof,” said Bos. “Impressive as it was at the time, I had always wished we could have done more to show our appreciation to all those that keep our nation and ourselves safe and free. This one is much more reflective of that!” 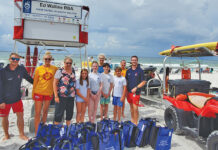 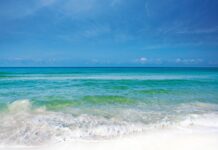